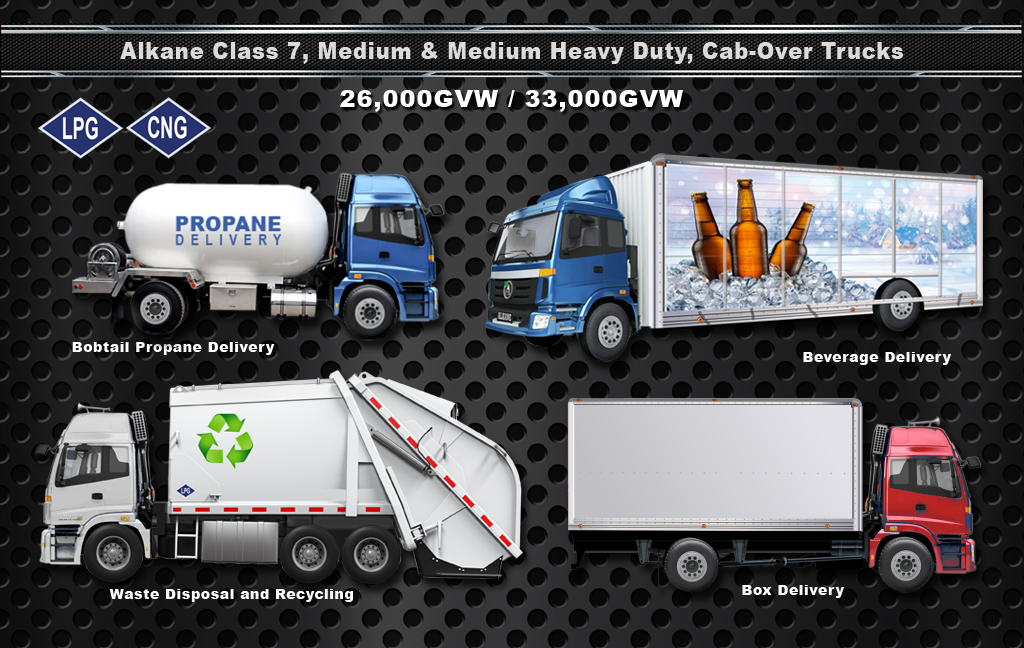 Alkane Truck Company, based in Myrtle Beach, South Carolina, is proud to announce the delivery of its liquid propane-powered, Class 7 trucks to the U.S. market.  The cab-over line of LPG trucks are in the final stages of integration and certification and will be available to more than 130 established dealerships in the U.S. and Canada by Winter 2014.

The trucks are currently in the finishing stages with Alkane’s engineering, development and fabrication firm in northern Michigan.  The stringent U.S. certification processes ensures that all EPA, CARB and DOT inspections are met, and includes specific vehicles compliance for engines, transmissions, fuel systems, windshields, headlights, brakes and bumpers.

The Class 7 Trucks will be offered in 26,000GVW and 33,000GVW weight classes and will be equipped with the PSI 8.8 Liter, liquid propane engine. They have an Allison 3000 series, 6 speed automatic transmission and the Bi-Phase, durability tested, liquid propane fuel system.

Alkane Truck Company sees liquid propane Autogas as the optimum alternate fuel for trucking in the U.S.  At the end of summer 2014, propane Autogas averaged $1.15 per gallon when dispensed with fleet volume discounts.  When compared to diesel at $3.85 per gallon, it is clear to see the fuel savings benefits with the plentiful and domestically produced LPG.

According to Bob Smith, CEO and Founder of Alkane Truck Company, natural gas fuels are the alternative fuels of choice that will ensure a bright future for the U.S. economy.  “Whether CNG, LNG, or LPG, Natural gas fuels are clean-burning, abundant, cheap, and domestically produced. In light of the current geo-political climate that could worsen overnight, imported oil is not a reliable source.  And, in an economy so dependent upon the continuity of transportation across our nation, having a domestic, reliable fuel source then becomes a matter of national security.  It only makes sense to transition as quickly as possible to our own plentiful fuel source; natural gas, and away from foreign oil dependency.”

Alkane Truck Company will offer a sneak peak of the finalized line of Class 7 trucks at the 2014 Southeast Alternative Fuels Conference & Expo Raleigh, NC this October.  The Raleigh Convention Center will host the event from October 22-24.